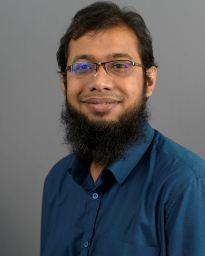 Aziz received his Bachelor’s degree in Electrical and Electronic Engineering at Islamic University of Technology, Bangladesh in 2009. In 2012, he was awarded the EIT-KIC InnoEnergy Scholarship to pursue MSc program ‘Smart Electrical Networks and Systems (SENSE)’ in KTH- Royal Institute of Technology, Sweden and Eindhoven University of Technology (TU/e), the Netherlands. He completed his master’s thesis in Electrical Energy Systems (EES) Group, TU/e, Netherlands where he worked on the development of production cost model incorporating both uncertainty associated with wind power plants and flexibility offered by electric vehicles. He has previously worked as a faculty in Ahsanullah University of Science and Technology, Bangladesh for around four and a half years. Currently Aziz is pursuing his PhD under the project titled “Demand-side Response and Energy storage within future Electricity Market (DREEM)” funded by Science Foundation Ireland (SFI) and Department for the Economy (DfE). His research interests are focused on operation of power grid with high renewable generation, power system dynamics and stability, demand response, optimal sizing of energy storage.
aziz.ibnsaif@ucdconnect.ie
Funded by: SFI
Damian Flynn
We use cookies on our website to give you the most relevant experience by remembering your preferences and repeat visits. By clicking “Accept”, you consent to the use of ALL the cookies.
Cookie settingsACCEPT
Privacy & Cookies Policy