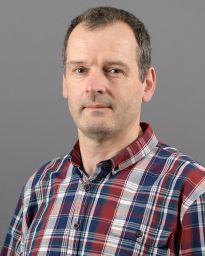 Cathal received a B.E. Degree in electrical engineering from University College, Dublin in 1990, and the MEngSc Degree in 1993, also from UCD. He joined Merrimack Transformers Ireland Ltd in 1993 as a design engineer where he remained until 2003. He was awarded Techstart Employee of the year 1994. After a period in non engineering work he returned in 2010 as a research assistant in a project to design, build and test a linear switched reluctance generator at the Institute of Technology, Blanchardstown, Dublin for 2 years. He then worked in Wavebob, a company involved with wave energy devices as a design engineer on the power electronics converter, for a short period and then lectured Mathematics for 1 year in the Institute of Technology, Carlow (2012-2013). He then started in his current position as a research Engineer in 2013 in the Energy Institute, UCD. His research interests are electrical machines, power electronics, Distributed Energy Resources and real time implementation.
oloughlin.cathal@ucd.ie
Funded by: ESIPP
We use cookies on our website to give you the most relevant experience by remembering your preferences and repeat visits. By clicking “Accept”, you consent to the use of ALL the cookies.
Cookie settingsACCEPT
Privacy & Cookies Policy