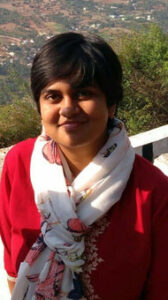 Aasifa's doctoral studies emphasize on nonlinear dynamical phenomena exhibited by mechanical systems undergoing impacts and friction in the presence of additive noise (advisor: Prof. Sayan Gupta, Indian Institute of Technology, Madras). These systems studied under the purview of discontinuity induced bifurcations are of interest to her where there are occurrences of events like chaos, grazing, co-existence, chattering, intermittency etc. Such phenomenological behaviors could be consequences of loosening of joints, free-play in gears/aeroelastic systems or sticking-slidings at tool-chip interfaces. She devises methods to trace out the basins of attractions of such systems from which their safe operational ranges can be read out. She currently works as a Research Engineer in the Dynamical Systems & Risk Laboratory, School of Mechanical and Materials Engineering where she looks into the deployment of neuromorphic frameworks to real time detection of anomalies in structural dynamical systems. Aasifa uses the Neural Engineering Framework to delve into these problems, meanwhile also taking a keen interest in the other core areas of neural cognition such as the dynamic field theory. This work is funded under the NeuroSHM project headed by Accenture Labs.
aasifa.rounak@ucd.ie
We use cookies on our website to give you the most relevant experience by remembering your preferences and repeat visits. By clicking “Accept”, you consent to the use of ALL the cookies.
Cookie settingsACCEPT
Privacy & Cookies Policy